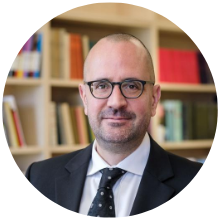 DIRK UFFELMANN studied Russian, Polish, Czech, and German literatures at the  Universities  of  Tubingen,  Vienna,  Warsaw,  and  Konstanz.  He  obtained  his PhD from  the  University  of  Konstanzin  1999  and  defended  his  second  thesis (Habilitation) at the University of Bremen in 2005 before teaching as Lecturer in Russian  at  the  University  of  Edinburgh.  He  also  was  a  visiting  professor  at  the University   of   Bergen,   Norway,   Western   Michigan   University, and   the University  of  Puget  Sound,  USA,  and  visiting  fellow  at  the  University  of Cambridge, the  University  of  Munich,  and  Leibniz  Center  for Literary  and Cultural  Research,  Berlin. From 2006  to  2019  he  taught  as  professor  of  Slavic Literatures  and  Cultures  at  the  University  of  Passau,  where he also served  as Vice President for Academic and Student Affairs from 2011 to 2014. At present, he  is  professor  of East  and  West  Slavic  Literatures  at  Justus  Liebig  University Giessenand President-elect of the German Slavists’ Association. His  research interests  are Russian,  Polish,  Czech, Ukrainian, and  Central  Asian  literatures, philosophy,   religion,   migration,   masculinities,and   internet   studies. Dirk Uffelmann has authored 4 monographs (The  Russian  Culturosophy,  1999,  and The  Humiliated  Christ—Metaphors  and  Metonymies  in  Russian  Culture  and Literature,  2010,  both  in  German, Vladimir Sorokin’s  Discourses, in English, forthcoming   with  Academic   Studies   Press,   Brighton,   MA,   and Polish Postcolonial  Literature, in  Polish, forthcoming  with  Universitas,  Cracow) and co-edited  14 volumes, including Tam,  vnutri.  Praktiki  vnutrennei  kolonizatsii v kul’turnoi  istorii  Rossii [There  within:  Practices  of  Internal  Colonization  in Russia’s  Cultural  History](2012), Vladimir  Sorokin’s  Languages (2013), and Postcolonial Slavic Literatures After Communism (2016).